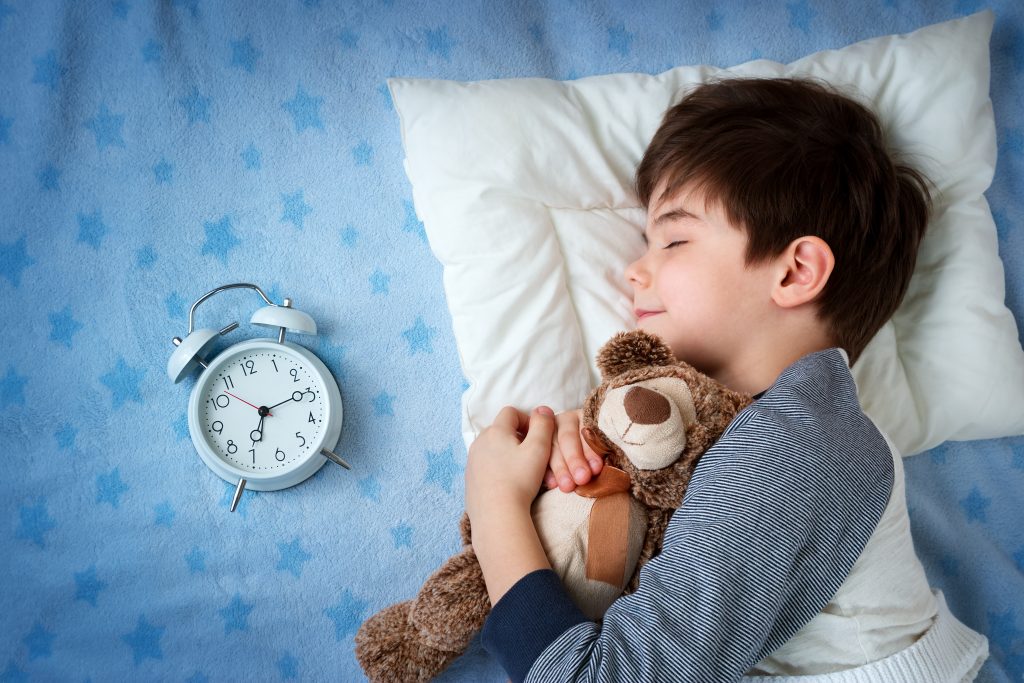 The Science of a Consistent, Early Bedtime

“At what hour ought a child to be put to bed in the evening?

At six in the winter, and at seven o’clock in the summer. Regularity ought to be observed, as regularity is very conducive to health. It is a reprehensible practice to keep a child up until nine or ten o’clock at night. If this be done, he will, before his time, become old, and the seeds of disease will be sown.”

– From Advice to a Mother on the Management of Her Children, Pye Henry Chavasse, 1869

How does the body know when to sleep?

Wisdom on how to properly care for a child has changed significantly over the years. However, this 150-year-old admonishment to maintain a consistent, early bedtime remains not only unchanged, but is increasingly supported by modern scientific evidence.

What Chavasse observed in the 1800’s was a behavior that was once so natural as to be taken for granted: humans, and young children in particular, become sleepy when the sun sets. The dimming light prompts the brain to begin producing melatonin, the hormone responsible for setting the timing of sleep.

Modern life, however, has changed our relationship to the clear cycles of light and darkness. In the 1930’s, scientists discovered that when people live in constant lighting conditions (initially tested by living deep in a cave), body rhythms continue to cycle, but people become desynchronized from the day.[4]Cave Dwellers, 1938 | The Scientist Magazine®. (n.d.). Retrieved December 1, 2020, from https://www.the-scientist.com/foundations/cave-dwellers-1938-33966 Individuals go to bed a little later each night, and wake a little later each morning. After a while, the main sleep period is happening during the day and wakefulness happens at night, until the body cycles the entire way around the clock again. This commonly occurs among people who are completely blind: it’s called Non-24-Hour Sleep Wake Disorder. What keeps us aligned with our environment is largely the presence of light first thing in the morning.

When people spend most of their days indoors and use lots of artificial light at night, we actually trend toward the same disorder. We drift toward staying up later at night and wanting to sleep in longer in the morning. This is because indoor lighting during the day is far weaker than the sun, and far stronger than any moonlight at night. By staying in relatively constant conditions, artificial light is strong enough to delay when the brain starts to make melatonin in the evening.[5]Gooley, J. J., Chamberlain, K., Smith, K. A., Khalsa, S. B. S., Rajaratnam, S. M. W. W., Van Reen, E., … Lockley, S. W. (2011). Exposure to room light before bedtime suppresses melatonin onset and shortens melatonin duration in humans. Journal of Clinical Endocrinology and Metabolism, 96(3), E463-72. https://doi.org/10.1210/jc.2010-2098 With a delay in the timing of melatonin, a person’s sense of when “night” is, and therefore when to fall asleep, shifts later. And while artificial light delays the feeling of sleepiness for everyone, the effect is strongest on young children.[6]Akacem, L. D., Wright, K. P., & LeBourgeois, M. K. (2018). Sensitivity of the circadian system to evening bright light in preschool-age children. Physiological Reports, 6(5), 1–10. https://doi.org/10.14814/phy2.13617

How does the body know when to wake up?

It may seem as though the body wakes up when we have “slept enough.” But as any seasoned parent can attest, if bedtime is later than usual by an hour or two one night, children absolutely do not sleep an hour or two later into the morning to make up for the late night.

The cause for this is because young children are strong morning types, or “larks,” as opposed to “night owls.” The first light of the morning today tells the body what time to anticipate as the start of the morning again tomorrow. In preparation for that waking time, the core body temperature begins to rise, hormones regulating hunger and blood sugar begin to anticipate the first meal of the day, and blood pressure levels climb from their lower resting point to enable healthy circulation for an active body. Like an employee opening the store before the customers arrive, the anticipated timing of light at the start of the day prepares the body for being active and open for business.

It takes several days with a delayed first light of the day in order to shift these anticipatory actions inside the body. In children, this internal alarm clock is quite strong and persistent. For this reason, consistent bedtimes are extremely important.

Can some children naturally be night owls?

A recent study identified several hundred gene locations associated with an individual’s natural timing of sleep. The researchers then looked at people who had the greatest number of genes related to being a morning person, and compared them with people who had the fewest of these genes. Between the two groups there was only a 25-minute difference in average bedtimes. [10]Jones, S. E., Lane, J. M., Wood, A. R., van Hees, V. T., Tyrrell, J., Beaumont, R. N., … Weedon, M. N. (2019). Genome-wide association analyses of chronotype in 697,828 individuals provides insights into circadian rhythms. Nature Communications, 10(1), 1–11. https://doi.org/10.1038/s41467-018-08259-7

So yes, genetics can make a difference in when people find it easiest to fall asleep, but the variation isn’t as great as most people assume. Plus, time after time, science confirms what most parents simply know to be true: toddlers are not night owls.[13]Randler, C., Faßl, C., & Kalb, N. (2017). From Lark to Owl: Developmental changes in morningness-eveningness from new-borns to early adulthood. Scientific Reports, 7, 45874. https://doi.org/10.1038/srep45874 Some may have an easier time falling asleep slightly later than their peers, but science is increasingly demonstrating that insufficient sleep, which is more likely to occur with late or inconsistent bedtimes, is a much, much bigger problem than parents typically realize.

What’s so bad about a late or inconsistent bedtime?

Sleep is a time of healing. The body is physically repaired, difficult emotions are processed and soothed, memories are stored, and mapping of connections within the brain brings about new insights and problem-solving capabilities.

Shortened sleep or inconsistent sleep timing not only deprives us of the host of benefits that sleep provides, but it also disrupts the predictive rhythms that the body relies on to anticipate when to be active, taking in food, and absorbing new information versus when it should be in a state of repair and knowledge consolidation.

One of the clearest consequences of poor bedtimes is weight problems. As is seen in adults, when young children are experimentally sleep deprived, they consume more calories–particularly in the form of carbs and sugar–on the day they are sleep deprived as well as on the day when they catch up on sleep.[14]Mullins, E. N., Miller, A. L., Cherian, S. S., Lumeng, J. C., Wright, K. P., Kurth, S., & Lebourgeois, M. K. (2017). Acute sleep restriction increases dietary intake in preschool-age children. Journal of Sleep Research, 26(1), 48–54. https://doi.org/10.1111/jsr.12450 Lack of sleep also slows metabolism, raises the hormone ghrelin that signals hunger, and decreases the hormone leptin that helps us to feel full.[15]Morrissey, B., Taveras, E., Allender, S., & Strugnell, C. (2020, April 1). Sleep and obesity among children: A systematic review of multiple sleep dimensions. Pediatric Obesity, Vol. 15. https://doi.org/10.1111/ijpo.12619

Not surprisingly then, poor sleep patterns are consistently connected to weight problems later on in life. The remarkable finding is just how interconnected sleep and weight are. Children with equivalent amounts of sleep but later bedtimes and wake times are more likely to consume sweetened beverages, less likely to eat fruits and vegetables, and less likely to be physically active compared with children who go to bed earlier and wake earlier. [16]Harrex, H. A. L., Skeaff, S. A., Black, K. E., Davison, B. K., Haszard, J. J., Meredith-Jones, K., … Skidmore, P. M. L. (2017). Sleep timing is associated with diet and physical activity levels in 9-11-year-old children from Dunedin, New Zealand: the PEDALS study. Journal of Sleep Research. https://doi.org/10.1111/jsr.12634 In a different study that also compared early to bed, early to wake children with those late to bed and late to wake, there were 29% who were obese in the early group. In the late bedtime group, the total was a frightening 71%.[17]Venkatapoorna, C. M. K., Ayine, P., Selvaraju, V., Parra, E. P., Koenigs, T., Babu, J. R., & Geetha, T. (2020). The relationship between obesity and sleep timing behavior, television exposure, and dinnertime among elementary school-age children. Journal of Clinical Sleep Medicine, 16(1), 129–136. https://doi.org/10.5664/JCSM.8080

Another study recorded the bedtimes of preschool children, dividing them into early bedtimes (before 8pm), bedtimes between 8-9pm, and late bedtimes (after 9pm). Ten years later, researchers measured the height and weight of these children who were now adolescents. The prevalence of obesity was 10%, 16%, and 23% respectively. Having an early bedtime ten years earlier was significantly protective against obesity when those children became teenagers.[18]Anderson, S. E., Andridge, R., & Whitaker, R. C. (2016). Bedtime in Preschool-Aged Children and Risk for Adolescent Obesity. Journal of Pediatrics, 176, 17–22. https://doi.org/10.1016/j.jpeds.2016.06.005

What happens when these slight day-to-day improvements in learning and memory are compromised by insufficient sleep at night? A large study of over 11,000 children found that irregular bedtimes at three years of age was associated with poorer scores in math and reading at seven years of age.[23]Kelly, Y., Kelly, J., & Sacker, A. (2013). Time for bed: associations with cognitive performance in 7-year-old children: a longitudinal population-based study. Journal of Epidemiology and Community Health, 67(11), 926–931. https://doi.org/10.1136/jech-2012-202024

While it may seem obvious that poor sleep and mood are tightly connected, the relationship is a complicated one. While adults become lethargic when tired, children often become more active and energetic. Sleep problems are also much more common among children with ADHD, with as much as 70% of ADHD children also having difficulty sleeping.[24]Mindell, J. A., & Owens, J. A. (2015). A clinical guide to pediatric sleep : diagnosis and management of sleep problems (3rd ed.).

While insufficient sleep and negative behavior can be a chicken-and-egg problem, large studies done over time can help to clarify which came first. A study of over 10,000 children in the UK found that when children continued to have inconsistent bedtimes across their early years, they were more likely to have behavioral problems at 7 years of age. If parents switched from inconsistent bedtimes to being more consistent, there was a smaller likelihood of behavioral problems.[27]Kelly, Y., Kelly, J., & Sacker, A. (2013). Changes in Bedtime Schedules and Behavioral Difficulties in 7 Year Old Children. PEDIATRICS, 132(5), e1184–e1193. https://doi.org/10.1542/peds.2013-1906 Another study looking at over 40,000 Japanese children found similar results, with either late (after 9pm) or inconsistent bedtimes in toddlers predicting behavior problems when they reached grade school.[28] Kobayashi, K., Yorifuji, T., Yamakawa, M., Oka, M., Inoue, S., Yoshinaga, H., & Doi, H. (2015). Poor toddler-age sleep schedules predict school-age behavioral disorders in a longitudinal survey. Brain and Development, 37(6), 572–578. https://doi.org/10.1016/j.braindev.2014.10.004

While the science behind bedtimes is complex and the consequences of poor sleep habits are far-reaching, the solution is simple. Keep bedtime early and consistent. Encouragingly, when children shifted from a late or inconsistent bedtime, they gained many of the long-term benefits of sleep. The best day to start a healthy habit is today.